Joseph L. Flatley is the publisher of Failed State Update, a news website covering “the culture of American decline,” including misinformation, conspiracy theories, and the politics of empire. He’s met with (and written about) Jonestown survivors, realtors for deluxe doomsday bunkers, and Julian Assange, to name only a few. His stories have appeared in a number of publications, including Postindustrial, The Verge, Pando, and CounterPunch. He is also the host of two podcasts: Failed State Update and The So-Called Prophet from Pittsburgh. His short films have featured at Three Rivers Film Festival (Pittsburgh), NonPlussed Fest (Los Angeles) and Desert Daze (Joshua Tree, CA). His most recent book is New Age Grifter: The True Story of Gabriel of Urantia and his Cosmic Family (Feral House, 2021).

New Age Grifter: The True Story of Gabriel of Urantia and his Cosmic Family 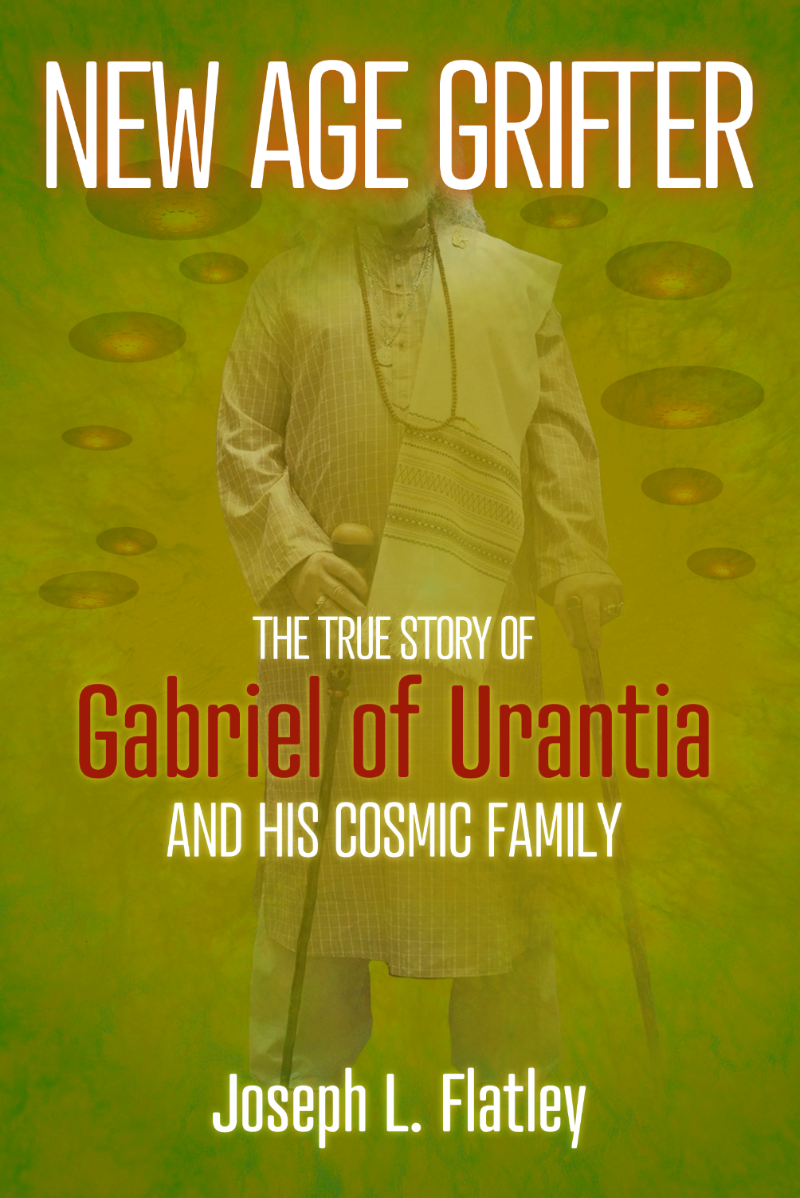 Gabriel of Urantia is the leader of a commune in the desert of southern Arizona. He has spent the last decades weaving together a belief system — a tapestry of Eastern spirituality, born-again Christianity, and New Age platitudes. His disciples tend the garden, take classes, run his businesses and serve their leader while they wait for the end of the world.

But Gabriel is a guru with an eye towards the recording charts. His band, TaliasVan and the Bright and Morning Star Band, is a 12-piece ensemble that combines Gabriel’s teachings and jazzy easy-listening tunes to join the long list of spiritually inspired musical acts spreading their message through song.

Journalist Joseph L. Flatley has investigated Gabriel’s group for the past five years. He uses legal documents, press accounts, academic research, and untold hours of exclusive interviews to get to the corrupted core of this experimental society. How does the group make its money? How does it control his followers? What is its connection to a powerful and controversial hedge fund billionaire? How can we recognize when beliefs and practices become destructive?

Rebecca Moore, Emerita Professor of Religious Studies at San Diego State University and Co-Director, The Jonestown Institute: “New Age Grifter moves along at a brisk clip, providing a clear background for understanding a controversial guru within the context of New Age religious movements. This account of the prophet from Pittsburgh is provocative, informative, and engaging."

Alexander Zaitchik, journalist and author of The Gilded Rage: A Wild Ride Through Donald Trump’s America: “With New Age Grifter, Joseph L. Flatley has produced a work of immersion anthropology worth scaling the compound walls for. But he did it the hard way, by talking his way past the desert gates into the center of a mystery more comic than cosmic. Give yourself a break from the nostalgia tours around Manson and Koresh and take this contemporary trip to the New Age Arizona community built around Gabriel of Urantia, aka TaliasVan, the most successful and least likely guru to ever emerge from under the industrial skylines of Flatley’s hometown of Pittsburgh.”

Jared Yates Sexton, political analyst and author of American Rule: How a Nation Conquered the World But Failed Its People: “What Joseph L. Flatley has done here with New Age Grifter is not only paint the portrait of a moment in time, imbue it with life and the appropriate madness and animate the characters, but to dig deep into where power, spirituality, and greed intersect and transform into something different, something terrifying.”

Adam Gorightly, author of Saucers, Spooks and Kooks: UFO Disinformation in the Age of Aquarius:“Part detective/part bemused spectator, Flatley deftly follows the trail of an aging hippie who somewhere along the line got dosed with a heavy hit of the Urantia Book and ultimately became known to the world (or at least to some residents of Tucson) as Gabriel, a wannabe rock star-turned-new age avatar and father figure to a flock of fawning supplicants who heeded his crazed clarion call.”

Jonathan Berman, director of Calling All Earthlings: “An intimate look at the dark side of counterculture, New Age Grifter serves us up a story that has to be read to be believed… and heeded.”

J.G. Michael, Producer and Host of Parallax Views:“In plumbing the depths of America’s subcultural fringes, Flatley may well be hitting on the pulse of what is driving our increasingly chaotic and strange zeitgeist more broadly.”